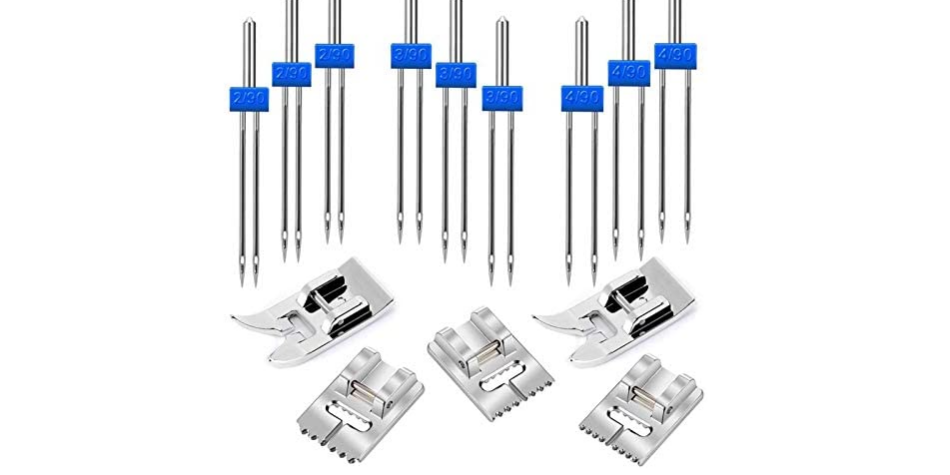 In this sewing tutorial, I want to show you how to use a twin needle – a very simple tool that expands the capabilities of even the most ordinary sewing machine.
The twin needle is made of two needles that are attached to a single crossbar.
It produces two rows of stitching on the topside and a zigzag stitch (well, kind of) on the back. It’s often used for hemming garments made from knit fabric – the stitch looks similar to the hem stitch on a T-shirt.

So, if you don’t have a special sewing machine to sew this kind of hems (it’s called a cover stitch machine) you can use the twin/double needles on your regular home sewing machine if you want professionally finished hems on knit garments.

The only big problem is that the seam doesn’t tolerate stretching very well.

With the twin needle, you can stitch two rows simultaneously creating various decorative effects. They have different distances between the individual needles, and depending on this distance, the appearance of the decorative stitch will change (becoming narrower or wider). A different width between the needles makes it possible to choose the width of the finishing stitch. Therefore, you will probably need to have several types of twin needles.

Different types of double needles are designed to work with different materials.
The needles differ by dimensions (thickness of the needle and the distance between the needles); by the color of the crossbar – the most common are dark blue and red but I saw also white light blue, and yellow; by the needle tip shape; by the size of the needle eye.

The most well-known and popular twin needles among consumers are manufactured by Schmetz, Singer, Klasse, and Organ.

Universal twin needles are great general-purpose needles. They are used for most woven fabrics and some stable knits. The universal needle has a slightly rounded tip so that it slips through the weave of knits easily while still retaining enough sharpness for woven fabrics.

Twin needles for stretchy knit fabric are usually thinner (size 75) and produced in two types: with an inter-needle distance of 2.5 or 4mm.

Embroidery twin needles are distinguished by an enlarged groove and eye, which makes them perfect for decorative stitches.

Embroidery is usually done at a higher speed than regular sewing. Specially coated, the larger eye allows smooth thread flow at higher speeds. This type of twin needles can be used with different embroidery threads – rayon, polyester, and cotton.

Metallic twin needles differ from the rest because of their enlarged specially coated eye (2 mm) and a large groove in a shaft that prevents thread breaks.

A twin needle for denim, in comparison to a double universal needle, has a sharp, strong point that penetrates dense fabrics.

Naturally, such a tip penetrates into multiple layers of thick material faster. In addition, the size of a twin needle for use on jeans is 100. Such a thick and sharp needle will make stitching denim fabric easy. Also ideal for topstitching woven fabrics.

How to install a twin/double needle

The twin needle is easily installed on most models of sewing machines.

For sewing with a twin needle, two spools of thread are needed. To get a neat and even stitch, the threads on both spools should be the same in terms of quality and thickness. The color, however, may be different. In addition, the threads from both spools should “exit” at the same speed preferably. To ensure such synchronization, it may be necessary to wind the threads on two identical bobbins so that they both fit on the same pin for the spool of thread. But of course, there are other ways to thread twin needles